Windermere Chambers Bay is proud to congratulate Elsa Borgen as the recipient of the 2018 REALTOR® of the Year Award from The Tacoma-Pierce County Association of REALTORS®. The award exemplifies faithfulness to the principles of the REALTOR® organization, commitment to education, professionalism, and the Code of Ethics. 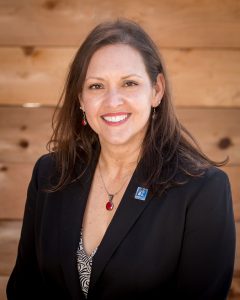 “It’s almost surreal,” Borgen says. She said she was committed from day one of her real estate career to TPCAR and the REALTOR® community. She said it has always been important to her to understand the role of the association’s leadership and how their work benefits member agents.

“I really do believe in what the association does. Without the association, the public would suffer,” Borgen says. “We lobby for consumer rights.” And this is work Borgen plans to continue.

Borgen has worked on behalf of her colleagues on the local and state levels in many capacities, serving as a director for Washington REALTORS®, chairing the Diversity and Members Services committees, joining other committees and subcommittees, serving on the Presidential Advisory Group and lobbying the Washington state Legislature. She’s also worked diligently to revive the TPCAR member services committee alongside fellow Windermere Chambers Bay agent Linnie Smith. She earned the TPCAR and Washington REALTORS® Community Service Awards in 2014.

Borgen works to demonstrate the association’s value, especially to agents who are new to the business. Part of that involves being immersed in the community through activities like blood drives and volunteering at Mother Earth Farm and the Northwest Furniture Bank, because it’s not just agents who see the benefits of TPCAR.

“We need to grow what we have and make sure it’s sustainable — change with the times,” she says.

It was Borgen’s first attempt to look at a new home that set her on the road to her own real estate success story. About 12 years ago, she and her husband welcomed three new children within 18 months (including a set of twins) and found themselves needing a larger home for their already growing family.

“I was a nightmare client right from the very beginning,” Borgen jokes. As a mother with small children at home it was often a feat to mobilize everyone for even a short outing. Helping her through that transaction was an agent team, half of which just happens to be TPCAR’s 2017 REALTOR® of the year, Jasmyn Jefferson, who then worked alongside her agent father. It was with their encouragement Borgen got her real estate license and charged into the challenging real estate market of 2007.

In that economy, it took seven months for Borgen to log her first transaction, and she managed it with three children under that age of 3 at home.

“God gives you what you can handle, and it was exactly what I needed,” Borgen says.

She was invited to make the move to Windermere Real Estate after adeptly navigating a challenging transaction and has not looked back since. She fell in love with the company culture and found her dream office. She describes a connection with a great group of agents who are able to find the best mix of competing with each other while remaining collaborative and helpful. This fall is her 10-year anniversary as a Windermere agent.

“It’s a good business, and I’ve met a lot of great people,” Borgen says. She’s quick to acknowledge the support she’s had along the way, especially from Windermere Chambers Bay Broker/Owner Patience Colkitt.

“I feel like Patience has my back. I know I can bend her ear whenever I need to on a professional or personal level,” Borgen says. “I love that office. It feels like home. You can just be yourself and do what you need to do.”

Borgen says her clients describe her as patient, understanding and a good listener. She says she just does what’s best for her client.

“I’m here to help people get to where they want to be,” she says.

As much as she enjoys her business and her work family, Borgen is quick to share what comes first for her.

“My focus is my kids and getting them to adulthood,” she says. Borgen and her husband, Tom, have 13-year-old twins, a 15-year-old and one adult child. Today she’s active her children’s sports activities and parent-teacher organization. She also volunteers at the St. Charles Borromeo Food Bank in Tacoma as she has for about a decade and serves on the Seattle University Global Engagement task force.

And her clients and colleagues understand and respect her family-first focus.

And it appears that doing her thing her way is working out for everyone.

Her favorite part of the work she does is handing the house keys over to first-time homebuyers. She identifies with the time and work people put into buying their first home because it was something she saw her own parents do. Nicaraguan immigrants, Borgen’s mother and father worked for over a decade after moving to the United States to buy their first home here.

Borgen was 6 years old when her family moved here. She didn’t speak English. She remarks on that journey to where she is in her career now, in the Pacific Northwest where she’s made her home for more than 20 years.

Thank you for your inquiry.